In Life at Language UK
0 Comments

Canterbury Cathedral – An architectural gem right in the centre of the city!

Canterbury Cathedral is an English Gothic cathedral located in Canterbury, near the southeast coast of England.

It was established by the monk, St. Augustine, in 603 when he was sent by the pope to convince the Saxon king of Kent, King Ethelbert, to convert to Catholicism. Shortly afterward, the king and his subjects converted to Christianity. Augustine, who had already founded a monastery, then decided to build a larger church within the city walls. The Pope gave this church the status of a cathedral, so Canterbury became the first episcopal seat of England, and the monk Augustine was it’s  first bishop. 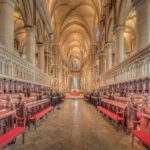 The building –At the end of the VII century, the city was recognised as the primatial seat of England. The monastery of Augustine disappeared during the Viking invasions, which devastated England in the IX and X centuries. It was rebuilt in 978 by Archbishop Dunstan, who consecrated it to its founder, who, in the meantime, had been canonised by the Church.

The cathedral was also rebuilt on two occasions: after the Danish attack of 1013 and after the Norman conquest of 1066.

In 1174, a fire almost completely destroyed the cathedral. The French architect William of Sens took care of its reconstruction, having decided to entirely rebuild the building in the Gothic style (already dominant in France).

Thus, Canterbury had the first Gothic cathedral in England, a splendid building with a double cross plan and three naves, especially notable for its length: 168 meters. This side of the cathedral also preserves the only original stained-glass windows, which survived the iconoclasm of the Anglican reform and the bombings of the Second World War.

The building was expanded more and more, year after year, thus creating the famous Canterbury Cathedral.

The Murder of Thomas Beckett 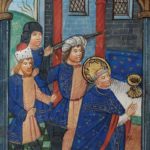 Canterbury Cathedral is famous because of a murder that took place within that building: Thomas Becket, the archbishop, and the former chancellor was assassinated by the king’s men due to a conspiracy. In fact, Becket refused to accept the Constitutions of Calderon in which ecclesiastical power was limited. Initially, Becket was a close friend of King Henry II before becoming archbishop. He was exiled in France for 6 years after a conflict with the sovereign. Upon his return, in the year 1170, the tensions resurfaced and it is said that the King exclaimed publicly: “Will no one rid me of this turbulent priest?”. Four knights decided to support the king and left for Canterbury. On the evening of December 29, the knights followed Becket inside the Cathedral and killed him, in a place today called ‘The Martyrdom’. Until 1220, the remains and the tomb of Becket were on the east side of the Crypt, and only two days after his killing, pilgrims began to arrive in large number at the Cathedral, especially when the legends of various miracles were spread. Thomas was canonised in 1173. In 1220, the tomb of the saint was transferred in the new Trinity Chapel, created specifically for Becket: he remained there until 1538. The assassination of Archbishop Thomas Becket made the Cathedral one of the top pilgrimage destinations in Europe. The assassination was recalled by the playwright Thomas Stearns Eliot in his theatrical masterpiece Murder in the Cathedral. 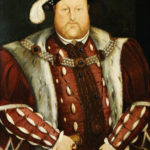 In 1540, monasteries were dissolved; the king removed the Prior and the monks. Monasteries were dissolved because of an ideological conflict between the Pope and Henry VIII: in fact, the king desired to break the sacred bond of Christian marriage in order to attain divorce from his consort Catherine of Aragon and marry Anne Boleyn. This conflict culminated in England’s separation from the Church of Rome. Such break may have also been inspired by the Evangelical Reformation which was spreading across Europe during those years.

To watch the video: https://www.canterbury-cathedral.org/whats-on/videos/

To take a virtual tour of the Cathedral: https://www.canterbury-cathedral.org/virtual-tour/